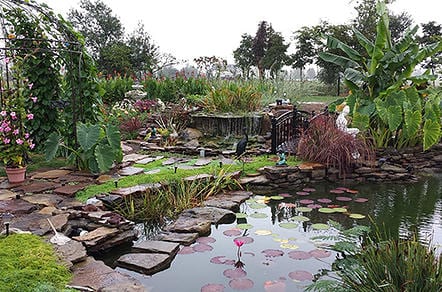 2015 is the year the Springfield Watergarden Society celebrates its 20th birthday. Over the years, the society has had a number of partnerships with the developing Springfield Botanical Gardens. They helped with the establishment of the lakes at the Mizumoto Japanese Stroll Garden. They have lent expertise and physical work to the development and maintenance of several of our water features in the park. But I have personally supported three distinctive efforts that the society has made over the years to establish waterlilies at the shallow east end of Drummond Lake. So far, each attempt has failed. We don’t know whether this is because of the geese or possible resident fish within Drummond Lake, but as those who attend my tram tours will know, it is still my dream that one day we will succeed. The idea of turning the corner at the east end of Drummond Lake to take the path down the south side where all those graceful weeping willow trees grow, and see big drifts of waterlilies in the shallows through the tracery of the willow leaves, would give us the effect of visiting Monet’s garden at Giverny in France.

I have been involved with the Springfield Watergarden Society since 2000 when I established my own watergarden at Alpha Meadows, southwest of Seymour. I no longer have a watergarden, but for my longevity and past efforts have found myself for the past two or three years, treasurer of the Springfield Watergarden Society. As long as I am an officer on the board of the society I will keep hoping that the day will come when we can achieve a Monet impressionist painting in the park with waterlilies growing in big drifts seen through the tracery of those willow trees. Perhaps we will have to build some sort of underwater fence to keep the predators out, but one day we will succeed.