The Kelsey Blog – by Peter Longley 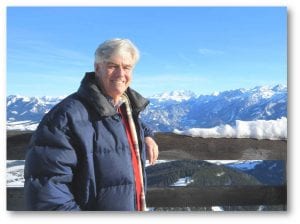 It seems like that pesky groundhog, Punxsutawney Phil, predicted another six weeks of winter for you when he scurried out of his little marmot hole and saw his shadow on February 2. Fortunately, they don’t pay much attention to him here in England. Today, I took a walk in Kelsey Park, and it was spring! I felt like Yuri in Dr. Zhivago when he looked out of the window and saw those daffodils in bloom.

I have been away most of the past month in Bavaria helping Bettine move house. Her landlord sold off part of the garden area to build a new apartment building. This would spoil her views of the mountains in Schoenau, and would have given her a year of construction chaos. She found a slightly smaller apartment in a small village closer to Berchtesgaden and a little higher up in the mountains. The views from there are superb, and although the apartment has less square footage, because of its layout and high ‘A’ frame ceiling it gives the appearance of being more spacious. It looks a bit like a miniature Alpha Meadows.

Berchtesgaden is a very pretty little town surrounded by high mountains, and was for centuries a retreat of the electors of Bavaria and later kings. The Wittelsbach family have been in unbroken succession rulers of Bavaria since the middle ages, and although Bavaria was incorporated into Germany in 1918, the family never abdicated. The present Duke still resides in the schloss from time to time and is particularly fond of his rose garden there.

There was a lot of snow while I was visiting, although it was not that cold—warmer than Missouri has been most of the time. Despite the move, we managed a few walks in the mountains and we plan on sharing more time together there in the future. My next visit will be in early May when all the Alpine meadows will be full of wild flowers.

Right before I left for Bavaria, Kelsey Park was showing signs of spring. The Chinese plums (Prunus Mume) were in blossom along with witch hazels (Hamamelis), and herons were nesting on our lake islands. Those early flowering prunus are now over, but pink Japanese cherry trees are in blossom. Drifts of snowdrops and crocuses are out, and large drifts of daffodils are about to burst into yellow just like those on the Russian steppes in Dr. Zhivago. Japonica is now in full bloom, and buds are swelling on many of the trees. The large planted beds of primulas (Polyanthus) and African Daisies are all blooming, along with yellow pansies. However, I expect them to be even better next month.

The park was busy as this week in England is ‘Half Term.’ Half Term is the mid-week of the schools’ terms when children now get a whole week off. That didn’t happen in my day. Some of our schools had half-terms, but they were only Saturday, Sunday and Monday, not a whole week. In fact, at my private boarding schools there were no half-terms. It was refreshing, however, to see so many children enjoying the park. It reminded me of those weekends in February when winter would let up in Missouri and we got those first days at 70F. The Springfield Botanical Gardens were always a mass of happy families breaking out from ‘cabin fever.’

I will think of you now as you get ready for the annual Lawn and Garden Show. I guess it is just two weeks away. Between now and then, maybe you will get that first 80F day despite Punxsutawney Phil’s predictions. But of course, it could still be 20F or ‘twelve below’ in the same week. Although we are probably still ahead of you with our spring, soon things will change. We won’t get a 70F day until well into April or possibly May. But I can not deny that a beautiful walk in Kelsey Park this morning in the spring sunshine really lifted my spirits. Note, too, that it is now light until 5:30 p.m., now that is a lot better than that Christmas 3:45 p.m. Our evenings will pull out faster than yours.

Valentine’s Day, just passed, is really that herald of spring celebrating the waking up of the birds singing their songs to attract a mate, or so Chaucer thought. I hope you all had a happy Valentine’s Day along with the birds. Spring is on its way.