Gardening centers and stores are bursting at the seams with beautiful new plants for spring. According to new survey results published by the National Gardening Association, garden-related spending topped $52 billion in the U.S. in 2018, which is an increase from previous years. With so much money spent on plants and a plethora of options to choose from, be aware of invasive species when purchasing new landscaping plants. 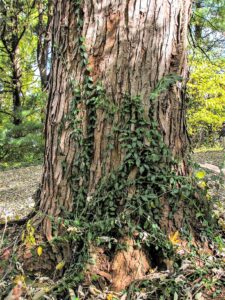 Wintercreeper beginning to choke out a tree.

Wintercreeper (Euonymus fortunei), was once recommended as a vining groundcover for landscaped areas. It can tolerate a variety of habitats including sun and shade. Its aggressive growth habit allows wintercreeper to spread and cover not only the ground, but trees and anything else in its path. The seeds of this plant are eaten by birds and passed through their digestive tract to new areas. The seeds sprout, and a new population of wintercreeper begins. There has been a dramatic rise in the infestation of woodland areas where they blanket the forest floor choking out native plants. It can be very difficult to control, even when full strength synthetic herbicides are used.

Bush honeysuckle spreading through an area of vegetation.

Bush Honeysuckle (Lonicera maackii) is one of the most pervasive invaders in Missouri woodlands. Honeysuckle blossoms were once a much-desired addition to home landscapes and bush honeysuckle was planted extensively as a result. Like wintercreeper, birds eat and transport the seeds to other areas, primarily forested areas and woodland edges where they quickly grow into a medium to large woody shrub that outcompetes native species. Once they are established in unwanted areas, they are very difficult to eradicate.

Fortunately, there are some incredibly beautiful native honeysuckle species that can be planted as an alternative. Native honeysuckle needs trellising and a couple of growing season to become established, but the blooms are highly attractive to hummingbirds and butterflies. 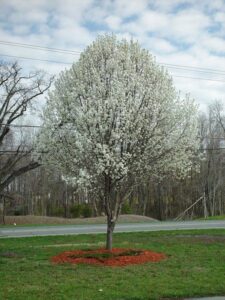 Bradford Pear (Pyrus calleryana ‘Bradford’) has also been planted extensively in the past 30 years because of its rapid growth habit, uniform shape, spring blooms and fall color. It was originally thought to be the perfect landscape tree and it’s small, pear-like fruit thought to be sterile. The fruit, which is eaten by birds and carried to new areas, turned out not to be sterile and new populations of Bradford pear quickly invaded natural areas. These new populations which started from wild seed often revert back to their wild form, producing trees that contain thorns.

Kelly McGowan is the Field Specialist in Horticulture for MU Extension in Greene County, Mo.