Garden News: What a Difference a Day Makes

by William Aldrich, Friends of the Garden Volunteer Liaison 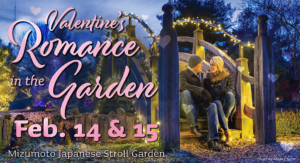 Scheduling outdoor events for mid-February takes a special kind of audacity. What are contingency plans if it snows? Rains? Sleets? Is unbearably cold? Howling winds?

Then again, there is Valentine’s Day and why not aim to offer a romantic stroll through a beautiful park with soft lighting in shades of pink, white and red? A light blanket of snow, perhaps, to cover the winter-drab landscape.

The Parks department and Friends of the Garden strode boldly into the mid-winter social scene with a Valentine-themed Romance in the Garden event in the Mizumoto Japanese Stroll Garden on Feb. 14 and 15. 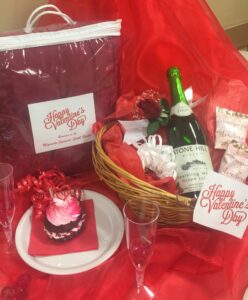 Picnic baskets prepared by the ladies of the Botanical Center front desk.

The results? Consider the weather: Thursday (14th), high of 62 degrees (average high 48); Friday, high of 29, falling temperatures and wind through the day, “wintry mix” and slush. The attendance? Surprisingly, four couples braved the abysmal conditions to take a Friday evening stroll, but three had pre-booked for the event. Valentine’s Day attendance was the other end of the scale. More than 100 people paid the $15 per couple entry fee to follow the twinkling lights through the 7.5-acre park, serenaded by special soundtrack. Twenty-seven couples paid a premium for a picnic basket that contained sparkling grape juice, a special cake, chocolates and a warm blanket. Proceeds from the fund-raiser will be used to complete the sidewalk project, replacing worn asphalt with stamped concrete.

The hit of Thursday’s event was the tea house, where couples could share a few private moments. FOG docent Chris Allen reported couples lined up to await their turn to look out at the park from the authentic structure.

With any luck, “wintry mix” will be a long-forgotten memory on the weekend of May 17-18 when the next “Romance” takes place. The picnic baskets will most definitely return, apologies will again be issued that it is sparkling grape juice instead of champagne, and the trees will be back in full foliage, replacing the lights of February. Hope to see you there. 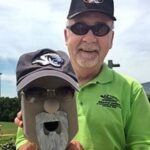